While Emma Frost is transformed into her organic diamond form, telepathy is completely blocked from her, including telepathic attacks.
Source: New X-Men Annual 2001

Not surprisingly, Emma Frost is a bad cook. She once substituted "one ripe tomato" for Heinz's Ketchup.
Source: Generation X #19. Click image for full size:

Emma Frost murdered her sister Adrienne with a gun after she killed some Generation X students.
Source: Generation X #70

The "X-Men: The Last Stand" novel by Chris Claremont explains the Stepford Cuckoos' past, who made cameos in the movie. They came from the expensive Massachusetts Academy whose headmistress wears all white - an obvious Emma Frost mention! 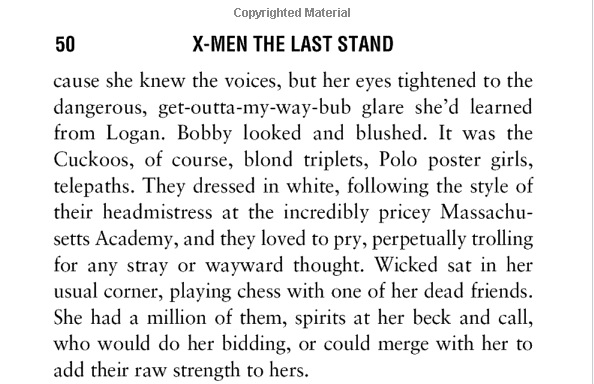