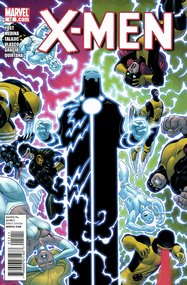 The issue flashes back to the original 5 meeting and clashing with the Evolutionaries, whose goal is to protect mutantkind and advance its species - even if that means eradicating all humans. Emma asks Scott why he hadn't told her about this before. He says he remembers just until now and that Jean did something. She replies sarcastically: "Of course she did." Scott then tells Emma to shut up. Wanting to find the leader of mutantkind, the Evolutionaries are attacking Cyclops. Scott tells the X-Men to not attack back, but under Emma's order and natural reflexes, they attack back to defend Scott. Scott tells Emma he didn't want the X-Men attacking the Evolutionaries so that they could avoid getting in contact with...Magneto. Preview