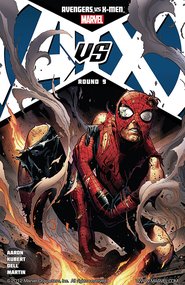 Emma rests at the Danakil Desert in Ethiopia, a remote part of Earth, and tells Cyclops that she could end this event very easily. Since Namor's fall, the Phoenix Force is making her telepathy very sensitive and more powerful. Cyclops tells her to get it together and to come back to Utopia. She reveals Hope's location, but Cyclops runs off to Hope before Emma says she's worried about what she might do next. She wants him to stop her. The next page shows Emma telepathically killing a man who is having dinner with his family because in 1987, he was flying a plane and hit a mutant with wings but never reported the death because he was just a mutant. She then states in Phoenixed-up form that nobody has secrets from her anymore.