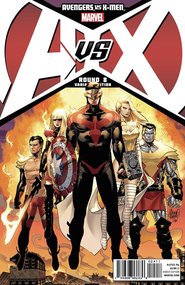 Magneto informs Cyclops that Namor is attacking Wakanda. Cyclops asks if Emma knows anything about this sudden attack. She says Namor does want Namor wants and at least they know where the Avengers are. Magik says Emma's got a point. While the Avengers are beating on Namor, the Phoenix Five head to Wakanda but the Avengers teleport to K'un Lun before the teams can confront each other. Magik announces that the Phoenix Force has been stripped away from Namor and merged into the other four. Professor Xavier telepathically tells Cyclops to stop the madness, but he refuses and says everyone is either with or against the Phoenix Five's vision of the world.