While Emma was on vacation, she had nightmares about Adrienne who had recently murdered one of Emma's students. Her telepathy played tricks on her, and she had mental illusions of Adrienne taunting her about the students Emma has seen killed. Emma came to terms with dreams by telling herself that she did not regret killing Adrienne. She just wish she had done it sooner.

Emma continued to teach a small telepathy class in Genosha until a group of Sentinels commanded by Cassandra Nova slaughtered the 16 million mutants living on the island. The X-Men found Emma Frost, who was holding a dead student of hers (Negasonic Teenage Warhead), emerging out of the rubble with her skin hardened in diamond material. Although stating her hesitance, Emma joined the X-Men when they took her back to New York.
Emma's codename "White Queen" was dropped when she joined the X-Men. She fulfilled the normal duties of an X-Man and actively taught at the school. She befriended a group of telepathic quintuplets known as the Stepford Cuckoos. They looked like clones of Emma, and they despised her teaching methods and often argued with her. They believed Emma had no heart and was a danger to children.

Cyclops and the Death of a Cuckoo 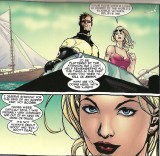 For the first time in a long time, Emma had a romantic interest and was attracted to Cyclops. During a mission in Hong Kong, she tried seducing him, but he was depressed dealing with the recent events of Apocalypse. Throughout that night, Scott also discussed his marital problems with Jean.

Emma and Scott continued their flirtatious conversations. Emma decided she could help Scott with his marital problems, so she offered him therapy and claimed she was a qualified sex therapist. The sessions turned into a psychic affair, where they exchanged their sexual thoughts. During their sessions via telepathy, Emma frequently changed into a Phoenix outfit and gave herself red hair, roleplaying as his wife. The affair felt wrong to Scott, but with the help of Emma, he justified his actions, saying it wasn't a true affair since they weren't physically touching.

Student Quentin Quire was angry at the school's pacifist ideals and led a riot on campus, which led to the death of Sophie Cuckoo in which she inhaled the drug Kick to become more powerful. The remaining Cuckoos blamed Emma for the death because she encouraged too much bravery in class. To make the Cuckoos jealous, Emma took Angel Salvadore on a shopping spree, but the Cuckoos had other plans. They told Jean of the affair between her husband and Emma.

Jean became infuriated of Scott and Emma's affair, so she telepathically ripped through some of Emma's deepest memories of the death of her students to find out what had happened in Hong Kong. Jean left Emma in emotional distress, Scott told her to look through his memories in which she found nothing about a physical affair. When Emma was gathering herself together, Wolverine expressed his sympathy for her, and she told him she hadn't felt feelings for a man in a long time.

Later, Beast found Emma shattered in her diamond form. Bishop and Sage led a murder investigation but had no success in finding the killer. In the lab room, Jean noticed Emma's consciousness and was able to telekinetically piece her parts together and restore her conscious. When Emma awoke, she said that Esme had shot her, with a diamond bullet.

New X-Men #150, #154
When Xorn turned against the X-Men in a final battle, he killed Esme who ended up dying in Emma's arms. She said she wanted to be nothing like her teacher, but Emma insisted she had turned into a wonderful person and was the most proud of her.

Scott returned from his absence and approached Emma to tell her he made a choice between her and Jean. But he was interrupted when Xorn killed Jean. Scott held his dying wife in his arms and told her he was sorry, and in Jean's final moments, she told Scott to live on.

After the disaster that Xorn left, Emma approached Scott while he was visiting Jean's grave. She asked him to rebuild the school to teach a new generation of mutants, but Scott declined the offer and told her the X-Men was over. The decision to not restart the X-Men led to an apocalyptic future where very few mutants were left on Earth. Jean, the current White Phoenix of the Crown, realized there was a broken timeline where the X-Men needed needed to be rebuilt. As a cosmic entity, Jean fixed what was wrong with the timeline and told Scott to live on, again. The timeline shifted back to the current time, and Emma asked him to rebuild the X-Men, again. Scott accepted the offer and they both decided to teach a new generation of mutants.