Around this time Emma Frost met Dark Beast when Banshee was working for Interpol. She also used her telepathy to spy on top executives at stock market exchanges and frequented the Hellfire Club galas in New York City. The events probably made her aware of ways to join the Hellfire Club.

She needed a job to reinforce the money she took from Lucien's gang. The Hellfire Club was hiring dancers in which Emma auditioned by performing the Dance of the Seven Veils, which greatly impressed the club. Her telepathy became very handy as a dancer, where she usually took men into private rooms and forced them to give her their money. She would then mind wipe them, so that they wouldn’t remember the event.

Professor Xavier needed new recruits to help find the other X-Men lost at the island of Golgotha. He and Moira MacTaggert visited the Hellfire Club and tried to force Emma Frost into joining their cause, but she refused, so he mind-wiped her without consent.

Through working at the Hellfire Club as a dancer, Emma caught the attention of the Hellfire Club elite, who knew she was a mutant. She eventually worked her way to become a prominent figure in corporate society. She earned money from stock ownership at an electronic and transportation company and eventually became a majority stockholder. She then became CEO and renamed the company to Frost International. At this time, she was headmistress of the Massachusetts Academy, a preparatory school for grades seventh through twelfth. Her rise in society gained her an invite to the upper ranks of the Hellfire Club.

White Queen of the Hellfire Club

Edward Buckman and Paris Seville, then-current Black Queen and White Queen of the Inner Circle, were humans with anti-mutant sentiment and had access to Sentinels. Sebastian Shaw gathered his cabal to overthrow the Inner Circle, but Buckman released Sentinels and killed Shaw's wife, Lourdes. To avenge his wife, Shaw killed Buckman with the help of Emma Frost. She manipulated the Black King into killing his own wife, Paris, and then himself. The leaders of the Hellfire Club were dead, and Emma Frost and Sebastian Shaw pronounced themselves the Black King and White Queen of the Hellfire Club.

Sebastian Shaw wanted royalty in the Inner Circle, so he attempted to recruit Namor, King of Atlantis, with the help of Emma. She visited Atlantis to seduce Namor into joining the circle, but Shaw sent Sentinels to attack the city after not hearing from Emma in weeks. Namor was angry at Emma, but she told him that the Black King cared only about power, while she cared about the rights of mutantkind. And she did not plan the Sentinel attack. Namor believed her, and they both traveled to the Hellfire Club to talk to Shaw, but Shaw defeated Namor by absorbing his power, and Selene erased Emma's memories of Namor and the whole fiasco.

The Massachusetts Academy ran a regular school, along with an underground school for the select mutants - who were known as the Hellions. During these years, the 13-year-old mutant Kitty Pryde caught Emma's attention as a new recruit. Emma introduced herself to the Pryde family and offered Kitty a chance to be enrolled in the Massachusetts Academy. Kitty's parents felt comfortable with the offer, but Kitty did not. After Emma left the Pryde's home with the offer open, the X-Men arrived and seemed friendlier to Kitty. She went to an ice cream shop with Storm and Wolverine, where the White Queen would ambush them.

Emma captured the X-Men in the ice cream shop, but Kitty got away and managed to contact the other X-Men. When the X-Men arrived at Emma's place, she engaged in a telepathic battle with Jean Grey, who was undergoing power transformations due to the Phoenix. Jean defeated Emma and left her in a comatose state. The Hellfire Club, who had ulterior motives, tracked the X-Men and seduced Jean Grey into becoming the Black Queen and, consequently, the Dark Phoenix.

After Emma Frost recovered from her comatose state, she recollected the memories that Selene erased during her bout with Namor. Kitty's parents requested that Kitty to withdraw from Xavier's and transfer to Massachusetts Academy. Storm drove Kitty to the new school, where Emma switched minds with Storm to infiltrate the X-Men. Meanwhile, Sebastian Shaw ordered Sentinels to attack the X-Men. However, their plan failed when Kitty helped the X-Men get away. Both Emma and Storm returned to their regular bodies, and she promised to never interfere with the X-Men again.

Emma Frost continued to train the Hellions, who were under rigorous training schedules. She frequently searched for new mutants using the Multivac, a mutant searching system similar to Cerebro. She discovered Angelica Jones, who would later be known as Firestar. Emma recruited the young mutant onto the team but separated her from the rest of the students, feeling that she needed special attention. Her motive was to make the young student her personal assassin to kill Selene, the Black Queen, but Firestar soon found out and blew up the gym that Emma used to train her mutants. Read more about Firestar and Emma in this post.] 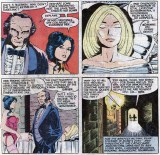 Later, Mastermind, a former colleague of the Hellfire Club, went mentally insane and accused Emma Frost of making a faulty mind control device he used to control Jean Grey. He attacked Emma and made her fall into a coma. The Professor offered his aid to Emma, but the Hellfire Club refused his help.

Emma slowly recovered from the coma and went back to teaching the Hellions. Kitty Pryde's boyfriend, Doug Ramsey, received an invitation to the Massachusetts Academy. Kitty was worried, so she tagged along in case Emma tried recruiting him to her team. Emma still held a grudge against the young mutant and wouldn't let her leave the academy. So, Illyana Rasputin gathered a team of young mutants and clashed with the Hellions to rescue Kitty. They defeated Emma Frost, and Illyana teleported her team to safety and away from the White Queen.

When the Beyonder killed the New Mutants, and then resurrected them, they were left in an unbalanced psychological state. Emma Frost used this as an opportunity to recruit them to the Hellions. She offered telepathic treatment and erased their memories of the painful events. The students were back to normal, but something was still not right. Magneto, the leader of the New Mutants at the time, discovered he was tricked by Empath to join Emma Frost, so he tried getting the kids out of Emma's hands. Emma used his villainous reputation to her advantage and called the local authorities to have Magneto taken away. The New Mutants discovered Magneto's past, but they rescued him, anyway, from the authorities. Emma Frost approached them a different way and offered to restore their minds. They accepted and parted peacefully. Emma left her offer open to the New Mutants in joining the Hellions. She reminded them that they should remember herself and the Hellions by their fondness. Magneto was aware of Emma's deceptive tactics and tried to convince the students that Emma was evil. But the students did not believe him and felt the woman was generous.

The Hellfire Club and X-Men were forced to fight together when Nimrod, a super Sentinel from the future, attacked them in Central Park. They defeated Nimrod but lost Harry Leland, a Hellfire Club leader, in the process. Due to recent events, they realized mutants were in danger, so the two teams formed an alliance.

The Hellfire Club needed new members added to the Inner Circle, so they offered Magneto the position of White King. Convinced by Storm of the X-men, Magneto accepted the position. Emma took advantage of Magneto’s weakened state and saw him useful to counter Shaw and Selene’s positions in the club. Magneto and Shaw were antagonistic towards each other; Magneto wanted to strengthen ties between the X-Men and the New Mutants, but Shaw only cared for the power of the club. Emma Frost was aware of their differences and got the Inner Circle to vote Shaw out of the circle. Magneto assumed position as the only king of the club, so he dubbed himself the Grey King. Emma and Magneto discussed how to get rid of Selene, but the two did not follow through.

Emma Frost still wanted Firestar on her team. The Freedom Force was looking for Firestar’s real name and current location, so Emma provided the information, hoping that Firestar would become vulnerable to attacks. However, Firestar quickly learned of this and avoided Freedom Force, and then joined the New Warriors. Emma Frost assumed that her vows to Firestar were void, so she and tbe Hellions attacked the New Warriors. They lost the battle, and Emma told the New Warriors to never cross her again. But before Emma and her Hellions departed, she told Firestar that the young mutant would, someday, apologize for her mistaken beliefs.

Death of the Hellions & A New Beginning

Emma Frost informed the X-Men that the Inner Circle was under attack by an unknown source. While the X-Men argued if they should trust the White Queen, Trevor Fitzroy barged into the Reavers’ building and slaughtered them with Sentinels. Fitzroy teleported, along with a few Sentinels, and attacked Emma and her Hellions. Emma tried to defend her Hellions, but Fitzroy was protected by a forcefield that canceled out telepathic powers. Fitzroy killed Hellions Jetstream and Beef and attacked Emma enough to leave her seemingly dead. The Sentinels killed the rest of the Hellions and also fought the X-Men and managed to psychically wound Jean Grey. The X-Men escaped with Jean Grey’s body, while Fitzroy took Emma's body and claimed her as his trophy.

The X-Men discovered Jean's mind was stuck in Emma's. So, they battled Fitzroy and took Emma's body. The Professor transferred Jean's mind out of Emma's, but Emma was still left in a coma.

Emma Frost rested comatose in the X-Men's headquarters until Bobby Drake checked on her status report. She woke up in panic, under the assumption the X-Men captured her, and transferred her mind into Bobby’s. She tried to escape and used Bobby’s powers in ways he never imagined. The X-Men had to convince her that she was not captured and also inform her about the Hellions’ fate. Whilst in ice form, Emma Frost rushed to Frost International to use its computer resources to discover what happened to the Hellions – they were dead. She thought it was her fault and asked the Hellions to forgive her because she wouldn't forgive herself. Emma asked that the guards at Frost International shoot her, but the Professor stopped them before they pulled the trigger. She, then, admitted that her students would have been better off with the Professor.