No joke -- EMMA FROST is the screenwriter behind "The White Queen," an upcoming BBC TV show that is unrelated to the the White Queen we know. The bizarre coincidence definitely piqued our interest.

We had the opportunity to talk to this UK-based writer. She tells us about herself and what life is like having the same name as a fictional character. Plus, she gives us the lowdown on "The White Queen."

For those unaware, Emma Frost (the fictional character) has always been known as the White Queen. Imagine a TV show called "The Bat Man" written by Bruce Wayne.

Indeed, Emma Frost knows who Emma Frost is and also tells us about her hilarious discovery of the character!

Hello Emma Frost! I am so very excited to speak to a real life EMMA FROST. I thought it was a joke when I read that a BBC show called "THE WHITE QUEEN" was being written by EMMA FROST.

So, tell us about yourself.

What got you started on your writing career?

EMMA FROST: I didn't set out to be a writer. I trained as a fine artist and sort of went sideways into film and TV. But because I'd never had any training as a writer, I knew that I had ideas and images but had no idea how to write story or dialogue. The only route I could think of that would earn me a living at the same time as learning how to write, was to go in as a script reader then script editor, so I did that (on shows like 'EastEnders'), and then I was Head of Development for a couple of different independent production companies. So I learned how to write by working with other writers, and dealing with scripts all day. But at some point you just have to take the leap. I was lucky enough that the first thing I wrote got made, and that enabled me to leave my day job and write full time. Other significant breaks have been a play of mine called 'Airsick', which changed people's perceptions of me as a writer and made people think I had a strong original voice, and then being a lead writer on Channel 4's award-winning 'Shameless'. 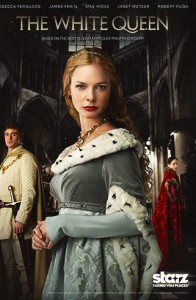 How did you get to write BBC One's "The White Queen"?

EMMA FROST: I was offered it. Company Pictures had optioned the series of books upon which the show is based ('The Cousins' War Series' by Philippa Gregory) and sent me the first book (of six) to see if I would be interested in adapting it for TV. They already knew me as a writer (not least of all from 'Shameless', which they also produce) and thought that I would be a good fit for the material. Happily, I agreed.

Did you know the show was going to be called "The White Queen" while you were in the early stages of writing it?

EMMA FROST: Originally we called the show 'The Wars of the Roses' because that is the period from British history that it covers and dramatises, and we felt that a wide audience would understand what that was as the Wars of the Roses are well known. However, Philippa was keen to call it 'The Cousins' War', to match the name of her series of books. In the end, we all agreed that 'The White Queen' (which refers to Elizabeth Woodville, who is the main character in the TV series) was the best name. I laughed, because I had said from the beginning, 'I bet we end up calling it 'The White Queen!'' And of course, we did...

How long have you've known a fictional character of the same name exists (since 1979)? What was your reaction?

EMMA FROST: In the late nineties I was in LA, and I needed to go to New Mexico to work with a writer there. So I phoned the airline, and I said I needed to book a ticket.

The man on the other end of the phone asked me my name, and I said, 'Emma Frost'.

There was a pause. So I repeated it, thinking that maybe he hadn't heard.

After a moment he said, 'That's not your name.'

I said, 'I don't really understand this conversation.'

Finally he started to realise that maybe I was telling the truth, and asked, accusingly, 'Do you KNOW that you're a cartoon character?'

I started to think that I'd wandered into 'The Matrix' or some altered reality, but then he told me about Marvel Comics' 'The X-Men' and 'Generation X' and even gave me the address of a comic book shop in Santa Monica where I could get some Emma Frost literature and read up on my alter ego.

What do you think of the character? Have you ever thought about writing for comics, such as writing for Marvel? That would be a hoot!

EMMA FROST: In truth I read the 3 or 4 I bought 15 years ago and not since, so I couldn't really answer what I think of the character. And I haven't ever thought about writing for comics. It's a very different field, and I think to write comics you have to be an avid reader (as you do with any writing, you have to be a fan of the medium and very versed in it.) So I would doubt that comic writing would ever be something I'd be likely to do.

Edit: There was a communication confusion, so Emma has added the following to her answer.

I think the comics and the character are amazing, and I love that I identify with her personality traits and her flaws too. I think it would be brilliant to write stories for the comic book Emma Frost The White Queen and if I knew the first thing about how to write comic books I would LOVE to do it... Alas I don't....

As a professional writer, have you had difficulties getting your name recognized on the Internet?

EMMA FROST: If someone wants to find me professionally they can do so easily because there's quite a lot of stuff about me as a writer out there now, but there was a time when there wasn't, and anyone googling me on the sly would come up against this sea of X Men Emma Frost pages and be thwarted in their attempt to cyber-stalk me. I really liked that, that my alter ego Emma Frost was a deflector shield against nosers and potential stalkers. The internet can really invade your privacy, so I like having Emma's force field to protect me.

Do you get any comments from people? "Hey, I looked up your works and found this buxom cartoon character..."

EMMA FROST: Google is a funny thing. People rarely tell you that they've googled you, so no, I've never had anyone say that. But sometimes when I've told people about Emma Frost, the X Men character, they kind of casually say, 'Oh yeah, I googled you once and saw all that...'

What I have had occasionally, which is less fun, is lewd or offensive emails from strangers who have somehow seen my email address or perhaps just randomly made up an email addresses with the name 'Emma Frost' in it. They ask me if I'm 'that' Emma Frost, and then say horrible, salacious things. I don't respond.

Besides your name, do you share any other similarities with the fictional character?

EMMA FROST: When I first told friends that I shared my name with an X Men character who could read and control minds, alter people's memories and get inside other people's heads, they laughed and laughed and laughed. A LOT. For ages. Because apparently I do that. One friend once called me 'a human x-ray machine'. It's one of a writer's skills to be able to read people and understand their motivation; understand what they really mean and want behind what they say. You have to have an instinct for the truth, particularly psychological and emotional truth. And I suppose I have a habit of being a bit too brutally honest when sometimes people would rather hide behind their illusions. So the 'getting inside other people's heads and rummaging through their secrets' is definitely something that Emma Frost and I share.

If you could choose between having telepathy or diamond skin, which would you pick?

EMMA FROST: Diamond skin, definitely. I think telepathy would be a curse, like it is for Sookie Stackhouse in 'True Blood'. Imagine having to constantly listen to everyone else's thoughts and neuroses, all day, every day, and not being able to get any peace from them. I like silence. It's very underrated.

Emma Frost Files is very excited for the upcoming tv show, and we thank you for taking the time to answer our questions!

EMMA FROST: You are very welcome. I hope you enjoy the show. In the UK it starts on BBC1 on June 16th at 9pm, and in the US on Starz channel on August 10th. Post or tweet #TheWhiteQueen and let us know what you think.