Hello, Emma fans! We got the scoop on EMMA FROST in the upcoming action RPG "Marvel Heroes." Ryan Collins, Community Coordinator of Gazillion Entertainment, talked to us about the gameplay, storyline and costumes. They also gave us an EXCLUSIVE costume reveal for the lovely White Queen -- a highly requested costume that hasn't been announced until now.

Marvel Heroes is available as closed beta. You can apply for a key by signing up through their website.

Read on to find out more.

Emma has a pretty diverse powerset -- she can be a telepath or a bruiser. Does her strength change when she transforms into diamond? As for willpower, she currently has some of the highest “will” compared to the rest of the playable character lineup. How does her "will" work in the gameplay?

Marvel Heroes: In Marvel Heroes, when you play Emma Frost you will get to play her in a way that is unique to you. If you prefer Emma Frost when she was only able to use telepathic powers, you are able to build Emma as a ranged character using only those kinds of powers. Adversely, if you are a big fan of the modern incarnation of Ms. Frost, you are able focus on her abilities that represent her as a sort of telepath/bruiser hybrid. Our site lists her as having a high Willpower stat in that she will be incredibly capable with telepathic moves and such, but it’s important not to rule out her Diamond form! 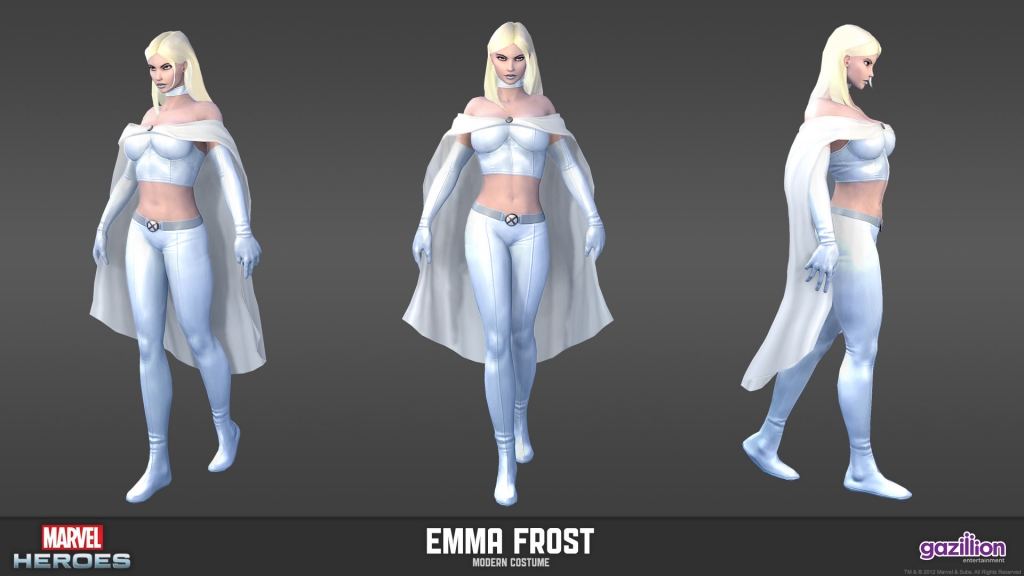 The plot of Marvel Heroes features Doctor Doom and the Cosmic Cube, a storyline that progresses relative to the player's involvement in the game. Is it possible we will see storylines featuring Emma?

Marvel Heroes: As stated, the story in Marvel Heroes focuses on all of our heroes banding together to prevent Doctor Doom from using the Cosmic Cube. Due to the scope of the story overall (and potentially expanding roster), individual characters will not have their own story - their involvement with stopping Doctor Doom is their story. Characters will be able to interact with NPCs with plenty of unique dialogue, and characters will also have recorded dialogue when interacting with other player’s characters in-game.

Kari Wahlgren (Wolverine and the X-Men, X-Men Destiny) is providing voiceover for Emma Frost in Marvel Heroes. Emma is known for her rather "scintillating wit," so how does her personality shine in the game?

Marvel Heroes: Kari is great as Emma, and we really think Emma’s personality will show in her dialogue. Characters will often interact with NPCs and other player’s characters in a way that is unique to them. For instance, if you are playing Emma Frost and you see another character playing Cyclops, she might deliver a line of dialogue unique to running into Cyclops.

Finally, we can’t forget about the costumes. The characters can get costume changes that affect their gameplay. Do you have plans to release variations of Emma's famous white attire, and how would they affect her gameplay? Would we see a cackling 80s villain with her White Queen costume? Hah!

Marvel Heroes: Currently in Marvel Heroes, costume changes will actually not affect your character’s gameplay, as we think you should be able to customize your hero in a way you see fit, with the powers you see fit. Every character will have several costumes, and you better believe we will have several of Emma’s white outfits. In fact, assuming that you’re all fans of the White Queen costume from the 1980’s, we thought we’d send it along as a bonus for the interview! 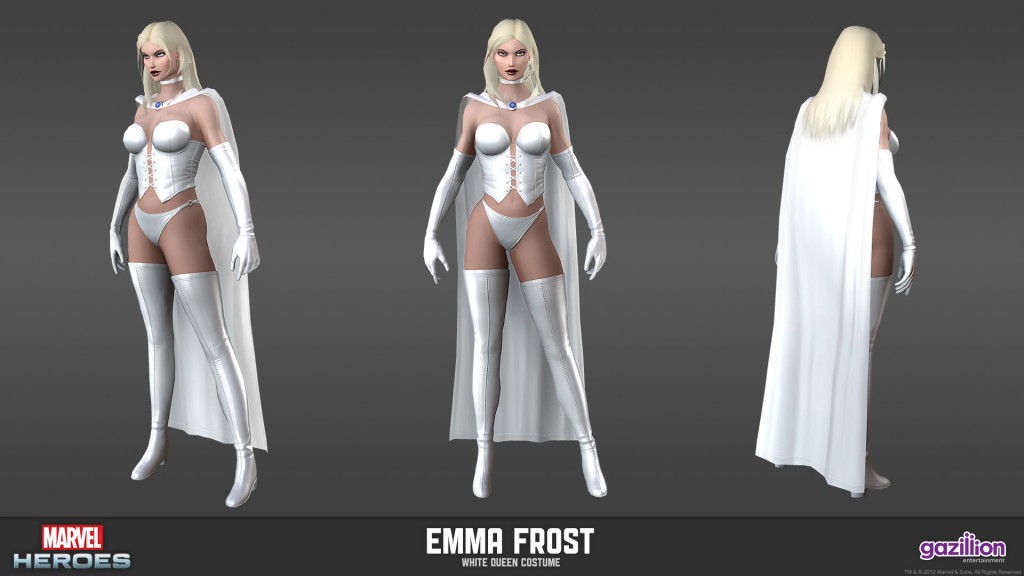 Thank you so much for taking the time to do this interview. Marvel Heroes marks the fourth game Emma Frost is available as a playable character, so we are thrilled another game is utilizing her potential. Thank you!

And that's it! Oh, and here's the full image to Emma Frost's White Queen costume in all her 1920x1080HD glory!