The creative folks at The Amazing Society talked to us about Emma Frost in Super Hero Squad Online, where she is a playable character.

Several step-by-step processes were made into making her character live, and lots of thought were put into her character design. They also talk a little about releasing the game in other countries, too.

Read the interview to find out more! 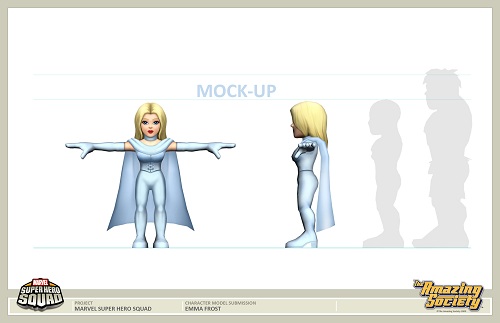 For those unfamiliar with Super Hero Squad Online, could you tell us about the game and Emma Frost's involvement? What's the reason behind her being a hero instead of a villain?
The Amazing Society: Super Hero Squad Online is an online game intended for players of all ages. But we also want to be true for the Marvel fans! Emma is a fascinating character, with rich and varied roles in the Marvel universe, and we thought she could also be great as one of our villains. But it was more important to us to make her a playable character as soon as possible, so we decided to focus on her transformation to a hero, as being the best for all of our players.
What processes were involved when preparing and rendering and, finally, releasing Emma Frost for the game?
The Amazing Society: Emma Frost in Super Hero Squad Online began as a concept sketch created by our veteran art team at The Amazing Society. The concept was then reviewed and approved by the Marvel, as being true to Emma’s Marvel lore and also appropriate as part of the Super Hero Squad universe. Then Emma was modeled in 3D Studio Max, and once her 3D form was ready, she went to our animator Kaitlin Spangler, to create Emma’s unique animations.
The next stage was visual special effects. FX artist Jeff Selbig, describes creating her special effects: “Emma Frost was a great and challenging character to make FX for. We knew right away that we wanted to feature her ‘diamond’ form, and decided that diamond-shaped sparkles and a frosty glow fit both the game’s art style and her famously icy demeanor.” 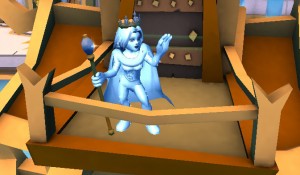 Then the sound effects for Emma were created by the talented team at Somatone. Finally the fantastic Design and Engineering team members programmed and tuned her attacks in the missions, designed the cards that will feature Emma for the upcoming card game, ran her through testing to make sure everything was working correctly, and did the many other tasks that brought her to life!
Emma Frost is known for her rather...risqué costumes. Did you have this in mind when designing her costume? Parents probably wouldn't be happy seeing a character running around in a thong and corset... What were the inspirations behind her costume?
The Amazing Society: Yes, we thought so, too! The artists were inspired by her Marvel costumes, but we knew we needed to make her into a character that would play well as part of the Super Hero Squad universe. Emma’s current costume is exciting and evocative of her more adult costumes, but still very appropriate for our younger players.
Characters get their own personalities, such as Deadpool's wisecrack humor, Captain America's patriotism and Spider-Man's happy-go-lucky attitude. How is Emma's personality incorporated into the game?
The Amazing Society: Emma’s personality really shines in her animations! Kaitlin did an excellent job creating her “power emotes” and her attack animations. If you want to see Emma at her best, take her into a mission and fight some bad guys! You’ll also enjoy playing her in the card game, where you’ll see many of her animations.
Animator Kaitlin Spangler describes what it was like to work on this exciting character: “Emma Frost was a lot of fun to work on, since she is such a strong, feminine character. I enjoyed animating her power emotes the best, especially Power Emote 3, which is one of my all time favorites.” (Note: To see her Power Emote 3, you’ll need to level Emma up to max!) 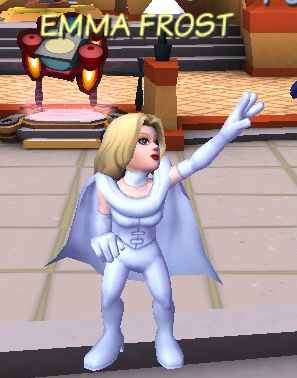 Emma Frost has so many international fans, and they'd love to play her in this game. She hasn't been a playable character since 2004's X-Men Legends. Is there a chance Super Hero Squad Online will be available for non-US countries in the future?
The Amazing Society: Super Hero Squad Online is available in North America and also some other countries, but not yet in the United Kingdom, Europe, and Asia. We do plan on bringing the game to those countries, but do not yet have a schedule for the game’s release overseas. When we know the timeframe for the launches in Europe and Asia, we’ll announce them on our website and on Facebook.
Thanks so much for taking the time to do this Q&A!
The Amazing Society: It’s our pleasure! It’s terrific to see her many fans enjoying playing as Emma Frost in Super Hero Squad Online!

Emma Frost is worth 600 gold in the game shop. Hero Up with her at Super Hero Squad Online now!