For those interested in getting to know Emma Frost, I've handpicked some fan favorite issues in canonical order, and scans are included for viewing pleasure. This recommendation list should give any a fan a good idea of the powerful character that Emma Frost is.

Emma Frost #1, #6
Writer: Karl Bollers
Artist: Randall Green
The first issue sets the basis for Emma's childhood and the close relationship she had with her brother, Christian, who was later kicked out of the house in issue #6 in which she rejected her father's inheritence and left the Frost household to make it out her own way. 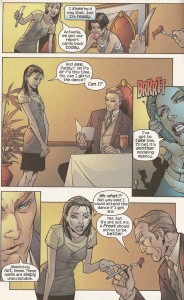 The "Emma Frost" series was published in 2003 - obviously, way after her first appearance. Although Emma gave some back-history in "Generation X" #24, Grant Morrison fleshed out her background in "New X-Men" #139 during a flashback and this series provided further explanation. Actually, Emma's history in which she explained her parents sent her to a mental hospital in "Generation X" #24 was retconned in the "Emma Frost" series. It was her brother who went to the mental hospital.
Single issues should still be about the same as the cover price. The "Emma Frost" series, which runs in 3 volumes, are collected in digests for about $7.99 each.
Classic X-Men #7
Writer: Chris Claremont
Artist: Dave Cockrum
Emma Frost, the new White Queen of the Hellfire Club, alongside Sebastian Shaw, the new Black King plot the takeover of the Hellfire Club, which was run by humans with anti-mutant sentiments. Emma Frost plays a pivotal role in this transition, where her telepathy plays a key part.
The "Classic X-Men" series served as a reprint of - well - classic X-Men issues. This issue reprints "Uncanny X-Men #99." Usually at the end of each issue was a backstory explaining the history of the original issue. Emma Frost has a beautiful pinup drawn by John Bolton in the back cover of issue #7: 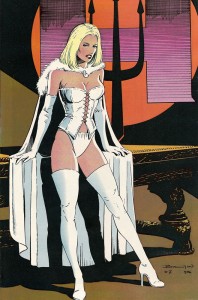 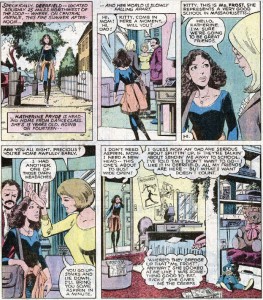 Issue #129 serves as Emma Frost's official first appearance, along with Kitty Pryde and Sebastian Shaw. I believe this issue runs around $50, so you can grab the Dark Phoenix Saga TPB, which collects issues #129 - #137, for much less than $50. Emma plays a large role until she gets taken out by Jean Grey/Phoenix in issue #131.
Firestar #2
Writer: Tom Defalco
Artist: Mary Wilshire
Emma commits her most ultimate evil act in which she telepathically kills Firestar's horse, Butter Rum, to manipulate the girl into being more responsible. The horror - it's almost funny. OK, it's hilarious and every Emma fan gets a kick out of this issue. 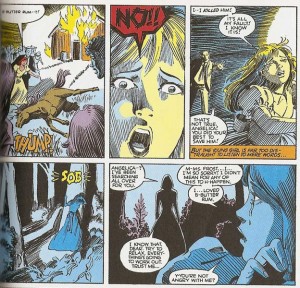 Firestar and Emma Frost's feud did not end in that series, though. In "New Warriors" #10, Emma and the Hellions fought Firestar's team and tried to recruit her again. At the end, Emma told the young girl she'd one day be sorry for her wrong ideology because Emma actually believed her ideology was the right one. Later in "Generation X" #59, it's Emma who apologizes to Firestar. Just recently, they met again in "Young Allies" #6. Emma offers Firestar a place in Utopia, but she rejects the offer and the two part respectfully.
If you want to read the entire "Firestar" miniseries in which Emma also plays a main role, pick up the "Firestar Digest" for $7.99.
Generation X #1, #70, #75
Writer: Bryan Wood, Warren Ellis
Artist: Steve Pugh 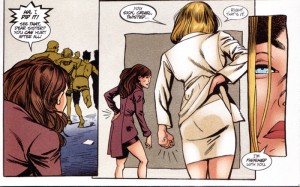 After Emma's Hellions died, the Professor offered her to teach a new generation of mutants. Emma and Banshee started the school, taking several young mutants under their wing. The school ran successfully until it had financial troubles in which Emma's sister Adrienne became involved to help fund the school.
But if you think Emma is the craziest of the Frost family, you're wrong. Adrienne Frost plants bombs at Emma's school and kills the student Synch in the process. Always overprotective of her students, Emma finally dukes it out with her sister and ends up killing her with a gun. Yes, this could be considered another evil act of Emma, but I can't say Adrienne didn't deserve it.
New X-Men #116, #138 - #140, #150, #154, New X-Men Annual 2001
Writer: Grant Morrison
Artist: Frank Quitely
"New X-Men" #116 is packed with the glamour of Emma Frost. Emma gets her secondary mutation. Emma explains to Jean why she's such a bitch. And Emma joins the X-Men, telling Scott she only came back for her Louis Vuitton. Grant Morrison sets up this issue with Emma as the star character and just a preview for the awesomeness that she is in the rest of his run. 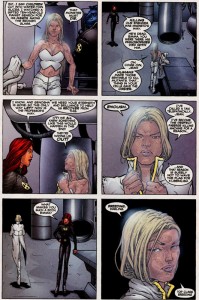 Emma's infamous psychic affair with Scott of all people starts the "New X-Men Annual 2001," issue #131 and continues in issues #138 - #140. Issues #150 and #154 are also important, where Xorn breaks hell on the X-Men, and Scott and Emma decide to start up the X-Men again in #154.
Pick up all 7 volumes. This is the series that turned Emma into one of the most popular X-Men in the comics right now.
Astonishing X-Men #1, #2, #12 - #17, Giant-Size Astonishing X-Men #1
Writer: Joss Whedon
Artist: John Cassaday
Joss Whedon's Emma Frost retains the wit of Morrison's Emma while making her especially distant - and that distance has to do with the weird voices Emma has been hearing. Because of her odd behavior, most of the X-Men don't trust her, not even Scott. It all starts rolling downhill in the Torn arc (#13 - #17), which turns into one of the best stories I've ever read in the X-Men.
Whedon takes everything from Emma's past and, most notably, Morrison's run by adding layers to her psyche. You get to see what really makes Emma tick, as well as the rest of the characters on the team too.
Oh, did I mention the dynamics of Emma and Kitty both on a team? Their past, in which both characters are disturbed about, is frequently brought up, and it plays out wonderfully. 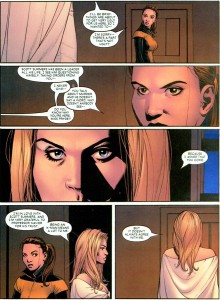 Whedon's Astonishing X-Men is collected in four volumes. It wouldn't hurt to buy all those either.
X-Men: Legacy #216
Writer: Mike Carey
Artist: Phil Briones
Hypocritical of Emma to be lecturing Xavier about his past? Yes, however, she does this because she feels this is the best way to probe for any signs of Sinister in his mind. At the same time, she acknowledges a telepath's wrongdoings are far greater because of the power they possess. 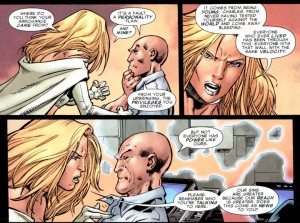 The issue is a great showcase of Emma's telepathic talents as well. Xavier is in her mind and not his, yet she is still able to walk through his past.
Well, that's all! Emma has become an increasingly popular character and is currently one of the main characters in "Astonishing X-Men" and "Uncanny X-Men." She's also a character in "X-Men: First Class," which hits theatres June 3, and is being played by Mad Men's January Jones.
Buying all these issues on one shopping day isn't quite a feasible option for most people, so if you want just the nitty gritty, pick up some of Morrison's "New X-Men" and Whedon's "Astonishing X-Men" - in my opinion, some of the best Emma stuff you can read.
If you're ever curious, check out Nikbackm's Google spreadsheet of every issue she's appeared in: Emma Frost Comic Appearances.
If you have any questions, just drop a comment.
-Aimee