MARVEL.com interviewed Matt Fraction and asked about Emma Frost's future for the upcoming Nation X storyline and discusssed the wrap up of Utopia. In the interview, Matt Fraction also claims that Emma Frost is "an omega class telepath."


From Marvel:
"With the brunt of the construction work completed, Fraction took some time to talk about the infinite possibilities of Nation X, the return of the X-Men's oldest foe and Cyclops getting a little less love from Emma Frost."

Marvel.com: Who are some of the characters to watch in the coming storyline?
Matt Fraction: Emma and Scott are always the axis. Beast. Magneto and Professor X. Rogue has returned. And, I think most tellingly is Namor. There's suddenly a very big gun on the table that the X-Men have never had before. I think Namor becomes a very big, very real and very important presence in the book.
Marvel.com: You mentioned Emma and in EXODUS, there is a scene where she goes into the white room inside the Sentry's head. That first appeared in NEW AVENGERS #10 years ago. Did you remember that scene and called up Brian Bendis and basically ask, "Hey, remember when that happened? Can I use that?" 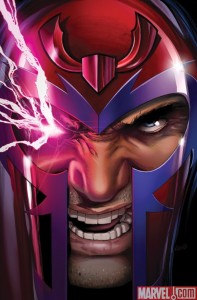 Matt Fraction: Pretty much. That story is one of my favorites. That first year, that "band together" year, where the team comes together I think is just terrific. And that [artist Steve] McNiven storyline is one of my favorite works that either of those guys [has] ever done. I was really always struck by the visual and the idea of it. I thought Brian really made Sentry accessible in a way the he really hadn't been before. So, when I think about the Sentry, I always think about that white room. Then when we built toward this X-Men/Dark Avengers crossover we realized we had all these pieces on the board. It's like finding all the right Lego pieces that fit together. At first it's just a pile of Lego, but when you get into it they all just snap together into one kind of coherent shape. These things happen and they don't feel bigger than they are, but then months of story later and it gains a resonance it wouldn't have otherwise. It's a very long way of saying, yes, it was basically me going, "Hey! Let's combine my Lego and your Lego and make this one giant Lego."
Marvel.com: You mention things from the past building to the present. And we see that with Emma, a piece of the Void still remains in her. Apparently these pieces continue to build to the future as well.
Matt Fraction: Yeah. She's stuck in diamond form. She's an omega class telepath. She can't risk giving the Void access to that. So, the X-Man's telepath is stuck in a diamond.
Marvel.com: You have to think that really sucks for Cyclops as kissing diamond seems uncomfortable.
Matt Fraction: Yeah. It also makes her cold and icy. I suspect there will not be a lot of kissing going on anywhere. [Laughs]